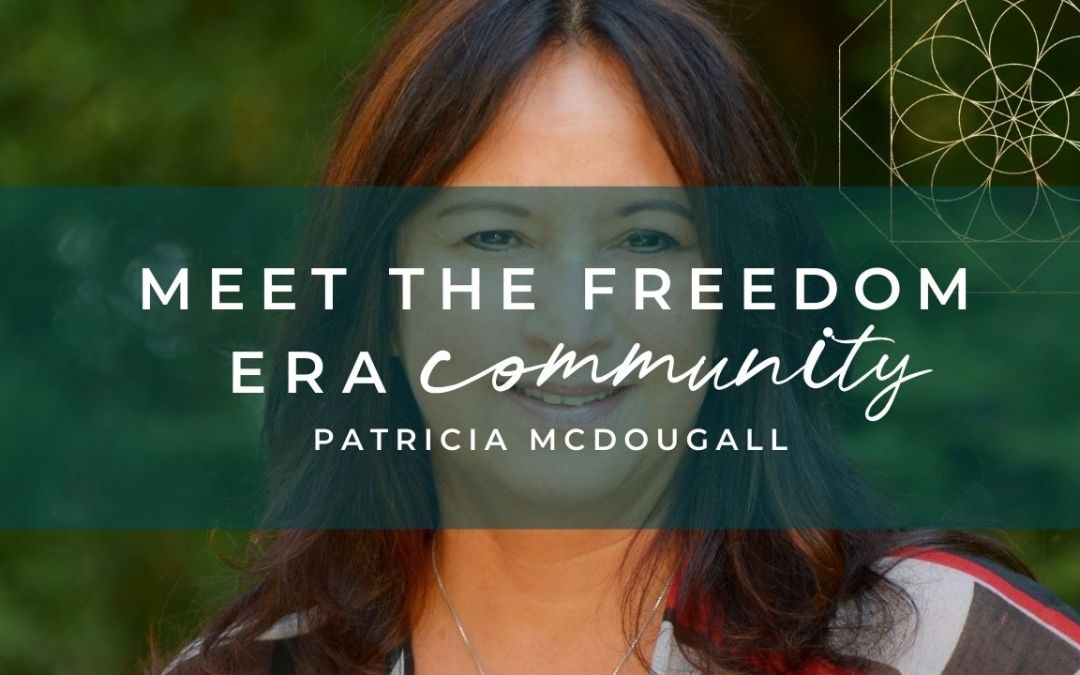 Phillipa: Hi, everyone. It’s Phillipa, here again for another episode of Meet the Community. Today, I have with me Pat McDougall, who is Salish from the Klahoose Nation. I had to write that down. She’s an amazing woman who has been a part of The Freedom Era for about three and a half months. Just to start us off, because I hadn’t heard of it before, and I’m not saying that everyone doesn’t know what I don’t know, but I would love for you to just let us know where is the Klahoose Nation, because I feel like that’s really interesting.

Patricia: Okay. Thank you, Philippa. It’s great to be here. The Klahoose Nation is in Cortes Island, which is two islands over from where I live. I live on Vancouver Island, BC, Canada. So, you need to take a ferry to Quadra Island and then another ferry to Cortes Island. It’s basically a half a day trip to get there and there’s a little community there. That’s where I’m from. It’s very, very beautiful. I would definitely recommend people going and having a visit, it’s very special. So I’ve been in The Freedom Era since the end of May and I have always been interested in building my business more than what I have.

I approached a friend who is in this, actually in a different business, and she had told me that she was in The Freedom Era, so I listened to the webinar. I’m always open to seeing what’s happening and what’s going on and what aligns with me and what gives me some juice. I loved it right from the very beginning. I aligned with the learning platform to begin with and then just recently I aligned with Enagic as well. So I’m just getting going. I’m excited to see where this takes me.

Phillipa: Yeah, awesome. I love that. So being part of the platform for three and a half months now what were you doing before joining the platform? Did you have your own business or working in a job? What was it like for you back then?

Patricia: So a year and a half ago, I went from working full time and a normal nine to five job, to going part-time so that I could build my business. I am a graphic recorder and I’m doing fairly well with that, but I was more called to work in the holistic field. That’s like being a healer and an empath, do some readings and some mediumship so I was really called to doing that.

I’ve always struggled to try to build a web page and build my business online. So when my friend Karen brought up the learning platform and that it’s all done for you and it teaches you how to do it. When I jumped in, it was all about law of attraction, which is totally where I’ve been for.. I don’t know, I’d say since 2010, when I learned about Esther and Jerry Hicks. So that’s kind of why I got here and I aligned with it and I’ve just been immersing myself completely. I just finished the 90 day Mastermind. I’m on the 30 day Mentorship. I’ve done the 30 days already, but I’m doing it again. So there’s a lot of information taken on at once, but it’s very exciting.

Phillipa: Yeah, amazing. I love that. So what I notice about people that they’re healers and intuitives, and they’re doing that as a business is that all you’re wanting to do is do more of that work. So working with people and helping them, but then the technical aspect of the business side, and the marketing, and the branding and all of that stuff, it’s kind of like it’s a different world from what you’re used to. So, do you feel like being part of the platform and learning that stuff, learning the personal branding and marketing and the technical side, do you feel like you… Like things are happening for you now, things are dropping in more when you’re putting those two worlds together?

Patricia: Yeah, definitely. It’s been a bit of a learning curve, but it’s been exciting too, to see how much easier it is than I had always thought it was. Once somebody shows you how to do it, it’s like, “Oh, that makes sense” and you go and do it and it’s like, “Okay, it’s really great”. I’m still learning obviously and I have my own challenges about the call to actions. I’m still learning to do that. I’m getting myself out there, I’ve done Facebook lives, I’ve done recorded videos, I’m posting on a more regular basis. I’ve stretched beyond what I could have imagined. And the rest of it, my whole entire life, this is the most I’ve ever stretched. I just keep going and I’ve always given up in the past “Oh, this is too hard” or “I can’t do this” or fear gets in the way or all those limiting beliefs. I just keep pushing through them. I mean, it’s not always easy right? But

Phillipa: Yeah, totally. So, you mentioned that you have also partnered with Enagic, which is the high ticket, one of the highest offers in The Freedom Era. How has that aligned with you as well in terms of the product itself and the business side of it too?

Patricia: The product down the business side?

Patricia: The product itself. Okay.

So, what could I say about that? It was very interesting. I resisted aligning with it. I’ve been in MLMs before, network marketing, and things like that and it’s never just been me. I’ve never been able to really been successful at it. So I was thinking that’s what this is. And so I didn’t. I was listening with closed ears.

I was resisting it and then I saw a video with Tariq and a lady from Fiji. He was talking my language that water is life, or that’s what I say, water is life, but he was talking about how water is energy and water is vibration and all of a sudden I was like, “Yeah, that’s who I am”. Water is life to me. Right? As an Aboriginal indigenous woman, the land, and the water, and the environment, it’s just, we’re all one. And that’s sort of when it all clicked and it was like, “Oh, okay.” I thought about it as an investment into my business. That’s how I looked at it. I didn’t. And so it was just, it worked, it just worked. Clicked.

Phillipa: Yeah, awesome. In terms of the master classes that we have each week from some of the high-level consultants that we have, has there been one that you’ve watched that you have really loved and you’ve really aligned with?

Patricia: Well, yeah. There’s been so many, let me think.

I mean, there’s been so many for different reasons. Depending on what I’m learning, I’m needing to learn at the time. Like, I needed to learn about Instagram and I feel I have a pretty healthy relationship with money, so I haven’t really dove into that, but in listening to Andrew’s class the other day, I felt I could go and listen to that money mindset right? And just ramp it up a little bit more right? Because I’m feeling like I really need to get more comfortable with the call to actions and maybe that’s tied in with the money story. I’m not really sure, but I think it is.

Phillipa: Yeah. And I think.

Patricia: Does that make sense?

Phillipa: Yeah, that makes sense because when you’re putting the call to action out there, it’s a call to action for people to take some action with you, to jump into something with you. So if you have some kind of fear around money and in your head you think if you put a call to action out and then people respond to it and they take that action, then that’s where the fear around money could come, because then you might start feeling like maybe it’s unworthiness. Maybe it’s not being good enough yourself. That can definitely stop you from putting out those call to actions for people to actually do something. So yeah, that makes sense.

Patricia: Yeah, exactly. It’s getting over those hurdles, those mental blocks.

Phillipa: Yeah, totally. So, what has been one of the biggest learnings for you so far within, since your time of being in The Freedom Era?

Patricia: From some of the teachings you mean?

Patricia: Oh, okay. Well I hope this applies. I know that we always talk about the inner work is 80% of it, right? And so I feel that’s where I have learned the most.

So many limiting beliefs growing up adopted, not having a sense of belonging or deserved-ness. Those sort of all become barriers on moving forward and in your work in your life. I feel like I’ve taken back my power. I’ve gotten more confident, I started drumming and singing, practicing culture, which I never had growing up. And I started to, I’m Incorporating my culture back into my life and I really think that has propelled me forward to continue doing the difficult things that we need to do in order to show up.

So I’ve been showing up so I that’s the biggest thing I’ve learned. I mean, everything else is technical, learning how to do Facebook or learning how to do not everything, but some of these things. I know there’s mindsets and there’s marketing. Oh yeah and you know, content. I had a bit of a block with content. I don’t know why because I can’t stop writing. So I think that really helped me the most, those were my stuck parts, the content creation and I’m doing it.

I think I’ll get better at it as I go along, right?

Phillipa: Yeah, totally. It’s only been three and a half months so far in, from what I’m hearing from you now, I feel like you’ve had massive growth within yourself and then also with what you’re producing and creating as well, so that’s really awesome.

Patricia: Yeah. So, I guess the other thing is just ensuring that I stay high vibe so that I’m attracting leaders into my life to be a part of mine.

Phillipa: Awesome. So, what would like a bit of advice or a golden nugget be that you’d want to give to people who are watching this now and maybe they’re thinking about getting started with The Freedom Era or they’re on the fence?

Patricia: I would say that this is the real deal. You get so much value. If you get nothing else, other than personal development out of joining this platform and this community, I think you won the lottery. Yeah it’s just, I feel like I’m a part of a community now that gets me. Whereas I’ve always sort of been different and people are talking about a law of attraction all the time. When I talk about it around my friends, they listen because they love me, but they’re not necessarily like full in, like everybody else around here is so that would be my, just go for it. It’s worth every minute.

Phillipa: Amazing. Thank you so much for being on with me today, Pat.

If you are watching this, we would love to know what you took away from this conversation here with Pat today. So just let us know about that in the comments down below. All right.