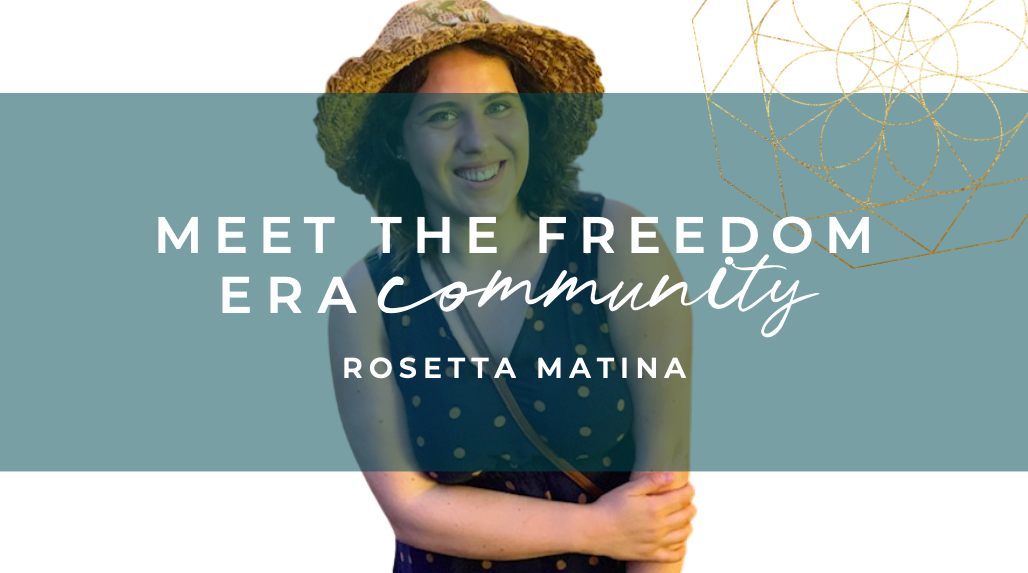 Phillipa: Hi everyone, it’s Phillipa here. And today, we have another episode of Meet the Community. I have with me the beautiful Rosetta Matina, who is in Melbourne. We just want to have a little conversation today around Rosetta’s story, her experience within The Freedom Era, in the hopes that if something that she says rings about or resonates with you, it’s always good to find commonality with other people, right? And really hearing their stories.

So, Rosetta, I’d love for you to start us off with introducing yourself. Who is Rosetta Matina and what does she stand for

Rosetta: Beautiful. Thank you so much for the introduction. So, I’m Rosetta. I’m from Melbourne, Australia, and I feel like I just have a big stand for visionaries out there. I’m a massive traveler. I’ve never really been the type to want kids, but I actually work with kids. I actually do photography as well. So, that’s alongside a child modeling agency. So, I work with kids as well.

But outside of that, I always knew that there was so much more than the 9:00 to 5:00. So, I’ve always been really interested in just a laptop lifestyle and a lifestyle of freedom, of choice. When I go on holidays, I hate being limited to the four weeks a year that I have permission for.

Phillipa: I love that. Yes. So juicy. So, how long have you been part of this community?

Rosetta: It’s actually been 12 months, which is exciting. I’m a Gemini sister, so pretty much I was… My gift to myself last year in June was the gift of freedom. And I had no idea how that would look. I had no idea if I would be successful. I just took the chance, took the leap. And here I am 12 months later, doing an interview that would have never even been a reality for me 12 months ago.

Phillipa: And what was the decision point for you to really activate yourself as being part of the community, and taking action on creating that freedom? What was happening around that time that made you think, “Yes, I’m going all in on this.”?

So, for me, the pivoting point would be looking at everyone’s success. And I actually got really triggered by that. And I had to look at that and think, “Why am I being triggered? It’s because I really know that I was born to do so much more.” Even if I had no answers, I didn’t… Everyone had a day one. So, I always had to look at those that went before me. I saw the action that they were taking. And it was just like they’re literally just coming on social media, sharing their message, sharing their truth, sharing their story, sharing their wisdom. Well, I can do that.

So, I had to really sit back and look at what was not serving me at that particular time, which was all of the fear, all the limiting beliefs, sitting on the fence. And yeah, I just thought, “Well, if three months have gone by and nothing’s actually changed, I’d actually regret if… One year from now, if I never took the leap, I wouldn’t want to sit back and think what of… “

The fear of the unknown is so much more scarier than just being in your comfort zone. And for me, I think that was my lying in the sand moment, where I just thought, “Yeah, if I want to have a different life, it just means I have to take on new beliefs, new actions, new thoughts, and just follow in the footsteps of those who have gone before me.” And I saw the community, I saw it growing, and I just wanted to be really part of that.

Phillipa: And so, speaking of community, so community is one of the seven pillars that build and create The Freedom Era. How has that been? Has it been a really important part for you, for your growth, for your success within this?

Rosetta: Yeah, a hundred percent. I feel like without community, you can have all the strategy, all the mindset, but unless you’ve got people to look up to and share your story with as well… The community is really what supports you, and it really… It’s like they’re holding your hand or holding your back. And they’re just right there with you, whether they’re in your direct team or not.

Especially at the event, Freedom Fest, I just felt so much overwhelm of emotion because it was like, “This is home. This is family.” And when you have a certain space in your heart for family, that is the exact feeling that I had with this community, that it wasn’t like… I’ve known these people for 12 months, and some of them were really new as well, but that community really allows you to go next level.

So, you can do all the stuff yourself, but then what’s the difference between being a CEO of a company, unless you’re in a beautiful container where so many people have the same vision, and they’re really just there to support you? So, that was… Honestly, one of the biggest reasons why I came into this space was the community.

Phillipa: So powerful. And so, has there been a specific lesson or quote or thought that you have learnt within The Freedom Era that you live by now?

Rosetta: Yeah. I think the biggest one that stands out is start before you’re ready, just because I was trying to wait for all the times that I wasn’t ready. And like, “When I feel that I’m ready, then I’ll jump in. When I have this, then I’ll have that.” I was playing the wind game a lot, I felt, and there was a lot of self-sabotage.

This platform has really taught me to already be that leader that I know I want to be, and act and do all the stuff that that 2.0 version of me would be doing, if I already had it right now. So, I think a lot of the training in the platform has actually propelled me forward to go into new levels even before I’m actually at the level.

So, when you internalize that, and the embodiment pieces and the mindset pieces in the platform have really allowed me to step into that truth and that belief that I’ve already got it now.

Phillipa: Beautiful. And this is a two-part question. One, can you please show us your amazing bookshelf at the back? And two, what is one book that you recommend every one read?

Rosetta: Okay. Well, have a look at this, you guys. No, I’m not at a library. Before this call, Phillipa was like, “Are you at a library?” I’m like, “This is my house.” The one book that I would highly recommend, and I’m sure that everyone’s heard this before, is The Magic. The Magic is literally magic. I swear by that book. I’ve done it multiple times, and always gets something new every single time.

The Magic has a 28-day… Every chapter is a different day. So, every day is a new learning and a new belief system, where you write out your gratitudes every single day. And when you have more gratitude in your life, you’re sourcing more of that into your life. So, I could not recommend that enough. The Magic, a hundred percent.

Phillipa: So good. Awesome. And what is your vision for yourself, for your business, for the people whose lives you want to impact in the world? What is that vision?

Rosetta: I love this one. My vision is pretty much what I’ve never lost sight of. I don’t look for motivation in this space because I’m so in line with my vision, and it’s always the thing that I come back to. My vision is to retire in my thirties. I’m 32, but within my 35 years, I want to retire, so I can live a life of freedom and a life by design.

But not just that I really want to travel, I think I’ve just been limited so much to the four or five weeks that I’m allowed to. So, I really wanted to go live somewhere, whether it be Canada, or whether… I just want option and choice. But also, I’ve just watched my parents just work my whole entire life, for sometimes six days, seven days. So, it’s to not just retire myself, it’s to retire my parents.

And also, buy a dream home. Before this space, I was looking at what can I afford? What does that look like? And what my dream house look like versus what I could afford, as a monetary type of thing, is very different. So, I want to have all the kinds of luxuries that I’ve been wanting. I want to have a beautiful little car. And I already know the house layout.

Phillipa: Amazing. So good. And last question, what advice would you give to yourself 16 months ago?

I knew that there was something bigger than myself. I just hadn’t found it yet. So, when I found this opportunity, I was like, “Okay, this is it.” But 16 months ago, if I could give myself advice, is to not be so hard on myself, know that there is something better coming, knowing that the universe will really make ways as long as I’m open to hearing that calling.

And also, don’t be afraid of judgment because people judge anyway, right? So, if you’re going to get judged, why wouldn’t you just get judged being exactly who you are and just aligned with your soul avatars, your soul tribe, your sisterhood, your brotherhood, your… just this community. Just to share that there is new doors being made where there’s the walls right now, and to hold space for that, and it’s all going to be okay.

Rosetta: Thank you for having me.

Phillipa: And if you’re watching this, please let us know in the comments, what is something that you have received for yourself from this share with Rosetta today? Just pop it down in the comments for us. Amazing. Thank you, Rosetta.

Rosetta: Thank you so much for having me.