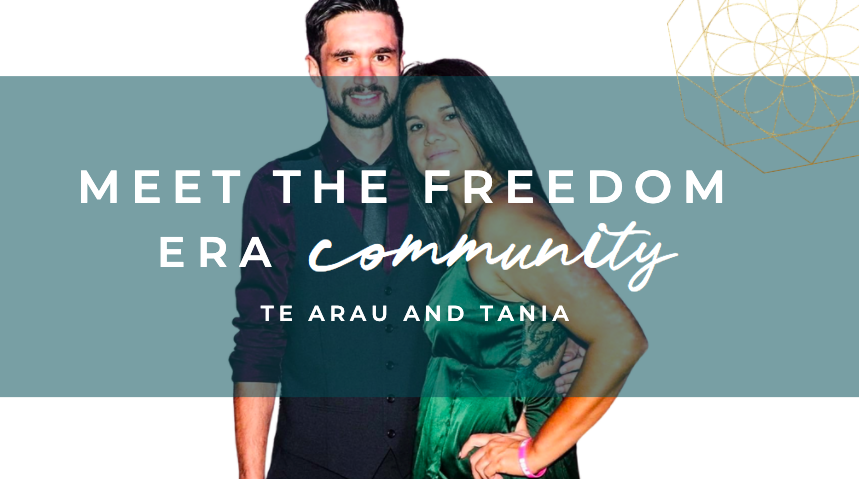 Phillipa: Hey everyone, it’s Phillipa O Wirangi here, and we are here for another episode of Meet The Community. Today I have with me the beautiful couple, Tania S. Bowman and Te Aru Marsh. They live in a little town called Woodville, New Zealand. For those of you that know New Zealand, it’s kind of by Palmerston North would be the next biggest place, right, that people would know about. Yeah. And so just to kick this off, I would love to know from you both, what does being in business together mean for you?

Tania: Being in business together means for me that we get to really connect more, I guess. Because for me, when we worked in full-time employment, I know for me it felt like even though we worked the same hours, I still felt like we were ships passing in the night because I’d be at work all day focused on my job and then we’d come home and it was kids, kids, kids, and then just go to bed. So the fact that we get to do this together has done wonders for our relationship. So it’s about connection for me.

Te Arau: Agreed. I’m excited to be home with my family, obviously, instead of slaving away for someone else. And that’s what she achieved. Connection and that.

Phillipa: Awesome. And so how long have you both been a part of the whole community?

Phillipa: And what was that decision point for you guys where you decided yeah, you’re going to do it? You’re going to jump in and create this?

Tania: We came to a point where we were just both super, super burnt out and we basically just surrendered to the universe and were like, come on, give us the answer. And yeah, out popped another ad. Yeah. So that was the deciding moment, just over being burnt out and not having any time for our family and for ourselves.

Te Arau: I just wanted more because I knew my job wasn’t going to give it to me. I’m just going to keep stuck in that same pay rate or whatever. And hope [inaudible 00:03:04]

Phillipa: And so for you Te Aru, so you quit your job. What was that experience like for you not working anymore, and then now having all of this free time? What have you been doing with your free time that you don’t have a job?

Te Arau: Just working on myself. Try and do. Getting there slowly. I’m on the camera. But it was hard at first. I was bored. I didn’t know what to do and everything. Just finding things, I guess.

I mean, obviously there’s pressure and everything, but it was a different kind of pressure and a different kind of stress. But the communication though has… the struggle through that has opened up our lines of communication and now we’re able to talk about it when things are stressful and aren’t working, and sit down together and come up with a plan of action to make it run smoother.

Phillipa: Yeah! Awesome. And then what about some of the winning moments? What have they been like for you? What are some of the things where you’re like, yes, that was so awesome, or you just feel really good about it?

Tania: Winning moments for me would definitely be the amount of people that we’ve been able to actually support and impact in the background. A lot of that goes unseen I feel like in this space, but the amount of people that commit with us and just really… Through our sharing our story and us sharing our struggles, people are connecting with us in the background and just letting us know how much they’ve felt connected to our story and haven’t felt so alone, and knew that there were answers out there.

Also, another winning moment for me would definitely be new experiences. We stretched ourselves to be at FreedomFest. That was a huge winning moment for us because normally we wouldn’t even consider it, because I had this guilt around not going anyway without kids. If we went away on holiday, our kids had to come, but to be able to go out and do that on our own and do something that was just for us, that was a pretty cool moment too.

Phillipa: Awesome. What about you Te Arau?

Te Arau: I don’t know. It’s what it’s doing for me, I guess. What I am becoming. I’ve been hiding away from the world in my own little corner. But I’d say the same, connecting with people in the background. I think I find more connections with these random people than our mates.

Tania: Just being able to connect with people. And I think leaving your job, that’s a winning moment.

Phillipa: Cool. So you guys invested in the high ticket offer. Was that decision one that was a little bit difficult for you to make, or was there a process that you had to go through in order to make that investment?

Tania: That was simple. It was really easy. We’d already aligned with the high ticket offer beforehand. We already knew all about it, and health and wellness is a huge part of our life and being able to align with an offer that ticked so many boxes for us, not just in financial terms, but also physical, spiritual, emotional as well. So, no that was easy. It was like, yay. We’re excited. We were actually excited for it again.

Te Arau: At first when she told me about it I didn’t want a bar of it, and then I watched it myself and then I found myself kicking on the beard. I was really excited that…

Phillipa: That’s awesome. And so what is your structure like in your day? So you’re both home together during the day. The kids are at school or maybe they’re at home during the weekend. What’s your structure for getting stuff done in your business, for being able to spend time with each other, for doing the the mom and dad things, the household things. What does that look like?

Tania: For the most part, so in the morning usually looks like us up before the children, just to sort of prepare ourselves for our days. Sometimes, like winter, it’s cold, I don’t want to get out of bed so we do it sort of after the kids have gone off to school and day care, sort of that inner work. But for the most part, it looks like me doing more of the business stuff and Te Aru is able to work on stuff around the house that was always on his list that he never had time to do like renovations. Just yard work and things like that.

And then we do all that stuff during the day while they’re in care so that when they come home, that’s their time with us. So we spend a good couple of hours, not just an hour or so here and there, a good couple of hours with the kids after school. And once they go to bed, we can do any sort of anything that needs to be done or… But it just flows really easily. Yeah.

You reckon, yeah? Do you want to add anything to that?

Phillipa: Awesome. And what’s your vision for your business, for your family, for yourselves?

Tania: That’s huge. Our vision for ourselves and for our family is.  My ultimate goal is to not have to ever be concerned for myself, or my kids’ future in terms of their finances. And to be able to impact thousands and really impact families all over the globe to live into the same freedom that we’re building for ourselves. Yeah. On a large scale, and then ultimately we want to own our own little retreat, well not… somewhere up by the beach and be able to bring people into our home and share our knowledge outside of the platform where we work in healing and natural health and things like that. So yeah, that’s our vision. But I’m sure as time goes by, it’ll probably expand more and more and more.

Tania: Communicate? Communication is huge. We’ve grown so much with our ability to communicate, even though Te Arau’s super shy, we speak to one another. So that’s really important. Just communicate and listen to one another’s fears and really hold space for that because in terms of the business, it wasn’t just about what I wanted. It was about what we wanted as a whole, as a family. So I had to listen to his fears, even though I was like, I’m just doing it anyway. Because fears and honor those and understand that and come to a mutual ground as well, and then work from that space. But communication, feel the fear and just do it anyway.

Phillipa: What did he say?

Tania: He said, “Fuck the excuses.”

Phillipa: Good advice. So your own excuses?

Phillipa: Amazing. Are there any last words, or little bits of advice that you want to give people now before we wrap up?

Tania: Saying yes to this opportunity, in the 13 years that we’ve been together, and the 12 months or so that we’ve been within this space, we have grown more over this 12 months than we did in the 13 years that we’ve been together. So if that’s what you’re passionate about, if growth, stretching your self expansion is all on the cards for you and your future this is the ultimate space to do it. Because there’s no hiding from any of your bullshit. None whatsoever. It’s all out on the table. You’ve got to face it. It’s in your face. Yeah. So just, yeah, just do it.

Phillipa: Do it, do it. All right. Thank you so much for being on here with me both of you. Super awesome. And if you are watching this we’d love to know, let us know in the comments, what is something that you have received that you have gotten from this conversation today with Te Arau and Tania?

All right. Thanks guys.

Tania: Thanks for having us. Bye.